A rather late November reads post, forgive me please!

So yeah I'm ever so slightly late in rounding up my recent reads, oops I've no clue where the time has gone. I'm not complaining mind you as I adore Christmas so I can't be annoyed that that time is fast approaching but still, argh! Anywho I've now read 47 books our of my planned 52 for 2013, so still some work to do. I think it'll be mighty close, but I'm still hopeful I'll make it! As for this month's reads it's been all about the YA as you can see from the below. One of the perils of starting a new job! Not that I'm complaining you understand as I've enjoyed each and every book, but I definitely think that I need to branch out in December, just for a little change. 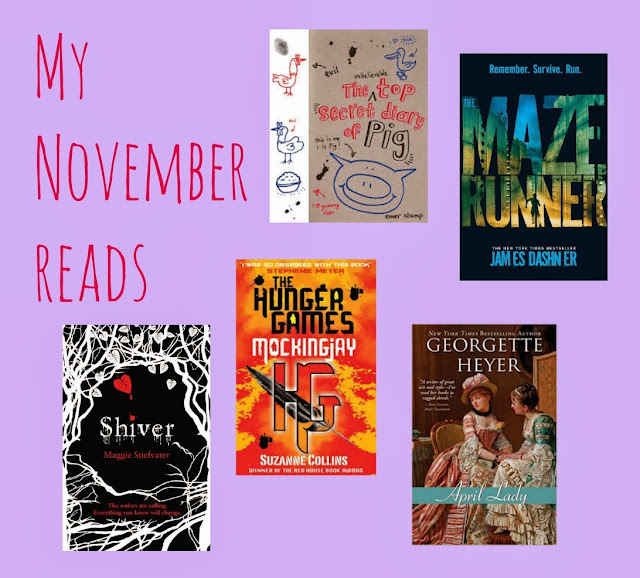 So down to my thoughts on each book. Let's start with Suzanne Collins' Mockingjay after all it is one of my all-time favourite books. This conclusion to the brilliant Hunger Games trilogy is really rather good and it answers everything that need answering and rounds things off perfectly. I love Peter in this book, his character really develops and it's interesting to see him not 100% in love with Katniss. Another thing that's great is Katniss's final action, as it's so in character. There's no way you can find fault with it at all and I think it’s a brilliant way to end a trilogy where the main character is out of the ordinary and not an obvious heroine. That's one of the brilliant things about Suzanne Collins, the fact that she's created a character that is interesting and full of surprises and she somehow manages to stay true to this character until the end. I also love that nothing is sensationalised to suit an editor or the storyline, it's all how it should be.

Next up is The Maze Runner by James Dashner, which is in the process of being made into a film. This book is really well written and it’s like you too are discovering this strange maze and crazy world at the same time as the main character. There’s just the right amount of intrigue and suspense and it keeps you enthralled until the end. I have to admit I read this book in two days as I suddenly got hooked about a third of the way in. For me the ending didn't quite thrill me as much as I thought it would, considering how I had the last 200 odd pages in one sitting. For some reason I wasn't quite reaching for book two as soon as I’d finished.

Maggie Stiefvater’s Shiver has been on my digital bookshelf for at least two years and I've just not found time for it, thankfully this has now been rectified as this book is brilliant! I loved the characters and I found myself getting so emotional and concerned at certain parts. It really is a roller-coaster read and I couldn't help but put myself into the situations they were in and imagine how I would cope, always the sign of a good book I think. The idea is such an interesting one and a different take than other wolf books. I can’t wait to read Linger but I'm stopping myself from reading it right away as I want to savour the trilogy rather than barrelling though it in a week and then having no more to read about those characters!

I read The Incredible Top Secret Diary of Pig by Emer Stamp as it’s one of the key books just released by my new publishing company, so it was all part of the preparation for my new job! So whilst not my usual type of book I'm so glad I read it as it’s absolutely hilarious and Pig’s voice is brilliant. You can’t help but love him in all his naivety and his grand adventure is really inspired. A good book for all ages too, I can imagine my almost six year old god-daughter giggling away to this and I know my Mum would find it hilarious too!

I've mentioned this final book, April Lady, on the blog recently as it’s one of the books I received as part of the #bloggerbookswap that Rosie organised. I was so pleased to receive this book from Alex as I've been meaning to read a Georgette Heyer novel for a while now. I've heard good things about them and was fairly certain I would adore her work and I most certainly did. So much so that I'm in dire need of her other books now – they must go on my shopping list! I’ll be sharing my thoughts on this book (and my other #bloggerbookswap books) as soon as I've read all three of them. As I want to do them as a separate post and compare my thoughts post reading to my thoughts on seeing the covers (read that post here).

So there we have it five more books down in 2013 and I'm creeping closer and closer to my 52 book goal. What's even better than getting closer to the goal? They fact that they were all really good books, don’t you just love when that happens! What about you, what have you been reading lately? Any suggestions for me?